The Elephant in the Shrine Room 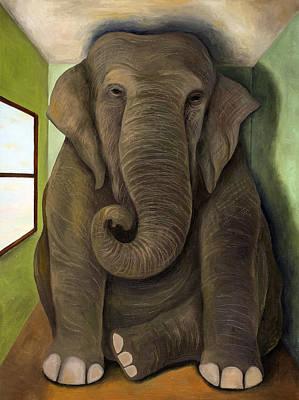 The first obvious sign that something is quite wrong in Triratna is the sexual abuse perpetrated by Sangharakshita and many others following his lead, which the inner circle cannot bring themselves to fully and publicly acknowledge, and which therefore remains a very large elephant in Triratna’s shrine room. We understand that many in Triratna find it painful to hear criticism of Sangharakshita or have attention directed to his sexual unskillfulness. It is not the fact that Sangharakshita had an active sex life (despite his frequent wearing of robes that indicated celibacy) that is a problem, so much as how he conducted his sex life, and the damage he caused through his insensitivity to his partners’ needs. This apparent lack of sensitivity is never named as such but rather paltered away as as an aspect of Sangharakshita’s ‘complex’ personality.

Matthew Remski, who does research on cults, notes how cult members can ‘love the group leader in a complex, intense, and painful way’, and members of Triratna are in fact encouraged to accept that one’s relationship to Sangharakshita can or should be ‘complex’. This love and admiration is often fraught because, for many cult members, when deficiencies in the leader are pointed out, ‘somewhere they are aware of the emotional and material capital they’ve given up to their commitment, and their ardour must measure up to that loss’.

Despite official silence regarding actual details of Sangharakshita’s sexual encounters with young men, there are many reports of Sangharakshita’s sexual ‘neediness’ from early order members (OMs) who experienced it firsthand, as well as from OMs and others who were manipulated, used and even assaulted by Sangharakshita and other senior OMs. These accounts are mostly not in the public realm but include incidents such as this, heard firsthand, of a young mitra being invited to Padmaloka retreat centre to ‘get to know Bhante (i.e. Sangharakshita) better’. His visit included lunch with Sangharakshita, a tour of the grounds and an invitation to ‘see my (i.e. Sangharakshita’s) room’ where intercrural sex then took place. The mitra in question was not too surprised by this turn of events as he had been warned prior to his visit what an invitation to ‘get to know Bhante’ actually meant.

What is public is at least one account of Sangharakshita having young men assigned to his bedroom at retreats where the only sleeping arrangement available was his double bed (Account of Yashomitra), and also an account of Sangharakshita ‘working himself up into such a state, crying, whining, moaning, sobbing, imploring’ when unable to be with a young man who instead wanted to be with his girlfriend (Account of Ananda). What emerges from these accounts is a picture of a man beset with sexual insecurity that carried on into old age (Account of Bjorn). We discover a man who was not above manipulating people and situations for his own advantage and who never matured sexually by entering enduring, age-appropriate relationships.

For Sangharakshita, in his book The Ten Pillars of Buddhism, the Buddhist precept dealing with sexual misconduct was conveniently re-interpreted not as sexual misconduct, but as exploring whether one too strongly identifies with one’s biological sex, with the goal of becoming ‘spiritually androgynous’. Despite its prominence in traditional Buddhist codes of ethics, including the Theravada Vinaya which, as a bhikkhu, he was technically subject to, the idea of sexual misconduct as the manipulation of others for one’s own satisfaction apparently never really registered with Sangharakshita. As above, he had young men assigned to his room on male-only retreats and continued to wear robes (which signify celibacy) both while visiting India and on ceremonial occasions, although it was known by many senior followers that he was sexually active. Looking at what Sangharakshita wrote in the chapter of The Ten Pillars, abstaining from sexual misconduct was given only a passing mention, the emphasis being instead on attaining psychic wholeness via engaging with the movement’s single-sex institutions:

"A state of sexual dimorphism is a state of polarization, tension, and projection, it is also a state of discontent. The state of spiritual androgyny, on the contrary, is a state of harmony, relaxation, and content… we encourage single-sex situations of every kind. This is not simply in order to curtail the opportunities for sexual misconduct, but also, more positively, to give both men and women some respite from the tensions of sexual polarization and to provide them with an opportunity of transcending, for a few moments, the state of sexual polarization and being simply a human being and - to some extent - a true individual. For those who wish to develop as individuals, and to progress on the path to Enlightenment, meditation and all kinds of single-sex situations are, in the absence of transcendental insight, absolutely indispensable."

Ironically, this required more deeply identifying with one’s gender and, as we now know, a male-only retreat centre offered even greater opportunities for sexual misconduct by Sangharakshita and many others rather than curtailing it. For many senior OMs who took this advice and abandoned having a family (or walked out on their families), and in many cases worked for low pay in the order’s institutions for decades and now cannot look forward to a secure retirement, to acknowledge that Sangharakshita used his 'teachings' to procure young (usually straight) men for his own sexual gratification, without the advertised spiritual benefit, is no doubt a bitter pill to swallow. After all, that generation sacrificed a lot -- all for a lifestyle and teaching that has not demonstrably led to Insight (and in fact has been pointing them in the wrong direction). If they’ve been practicing the ‘Triratna Dharma Life’ for 40+ years and still suffer, or have not even taken the first step towards ending suffering (i.e., seeing through the self-view), what does that say about what they’ve devoted their lives to?

The official response, unfortunately, is illustrated by some of the 'frequently avoided questions' (FAQs) issued by the College of Public Preceptors, the order’s governing clique, by which the inner circle continues to palter and obfuscate, rather than publicly acknowledge, Sangharakshita’s obvious shortcomings. Because they choose to ‘hold the contradiction’, which they learned to do many years ago, they believe it is their duty and right that the whole Triratna organisation hold that contradiction as well. If it were up to them (and it is), Triratna will never, ever publicly and fully acknowledge and apologise for the harm that Sangharakshita and many others (perhaps including some on the College) inflicted over the years. That it will not happen was made explicit in writing to a former order member, by the most influential member of the College, in an email exchange in 2017 where he was also told, in no uncertain terms, to stop raising concerns about Sangharakshita’s teaching and behaviour or he would have no choice but to leave the order.

Lack of commitment to transparency on these issues was illustrated by the College’s embrace of Sangharakshita’s vague statement in 2017, where he expressed regret for hurting and harming other Buddhists, as a 'confession'. This was even though Sangharakshita said nothing specific about who he had harmed, what he actually did, why what he did was harmful, or what he would do to make amends or change his ways. The Buddhist tradition requires these important details for it to be an actual confession, and coincidentally these details are what most parents would expect and get from young children. Subsequent statements from Sangharakshita watered this 'confession' down even further, where he said (as merely an aside) that he came to learn that it was best to keep sexual relations and spiritual friendship separate, and ostensibly equated the harm he caused through sexual misconduct with being disrespectful towards his father as a teenager.

College members are very keen to point out, in regard to everyone except Sangharakshita, that ‘Insight will be seen in our behaviour’. Indeed Sangharakshita explicitly (and erroneously) taught that those with insight into the Dharma will have 'perfect' morals and ethics. This raises a problem for the College, though: that criterion simply cannot be applied to Sangharakshita, because he was eventually forced to acknowledge how imperfect his morals were. As a result, in his special case, members of Triratna are exhorted to ‘hold the contradiction’, occasioning a form of highly destructive cognitive dissonance, rather than accept that Sangharakshita neither knew what the experience of Insight is about nor met his own erroneous ethical criteria. It literally made one College member run to the bathroom and vomit after it was suggested to them that the 'perfect' ethical criteria they were seeking to apply to others should also be applied to Sangharakshita. That is how deep the resistance is to hearing, much less allowing, meaningful criticism of Sangharakshita runs, because the implications of his behaviour so go against who they believe Sangharakshita was.

Sangharakshita described his extended ‘experiment’ with sex as being based primarily on his (spiritual) intuition; however, that his spiritual intuition was so far off the mark is something that the College simply cannot accept. It really is sad, and telling, what it is the College are willing to credulously accept, and what they expect others to accept. Unless and until that changes, Triratna can expect regular, embarrassing exposures in the media, because the College will not allow the underlying issues to be addressed and put to rest, for fear of how it would (accurately) reflect on the teachings and legacy of Sangharakshita.